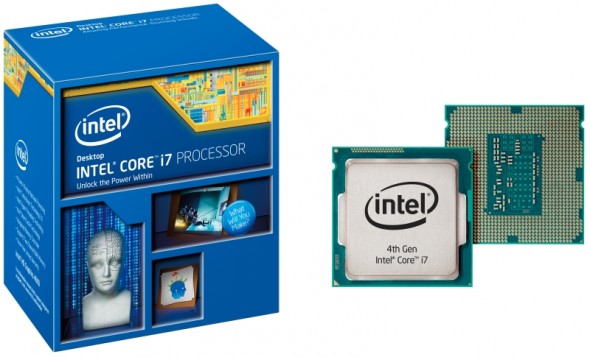 I have been struggling with selecting the perfect developer laptop (in my eyes) for a couple of months now as I have been waiting for ultrabooks with the latest Haswell technology. Now I'd like to share what I ended up getting and what I ended up returning back to the store as it was just not good enough.

When I initially started looking for a new laptop in the beginning/middle of the summer, I was looking for something that "had it all" these were my requirements at the time. Remember, as developers we are custom to requirements changing and this case was no different.

That's about it, in no particular order as I wanted it all - I was unwilling to change my mind. When it came to the end of the summer and my new gig at Readify was about to start I had to choose something. However by this time nothing that matched the above existed I could either get something that was really light-weight with long lasting battery or I could get a heavy beast with kick-ass performance.

After lots of discussions with friends, family and tweeps I decided to get a MacBook Air as it had most of the above except touch screen. At least this was my impression at the time. The new MacBook Air has one of the latest Intel i7 haswells which has the new Intel HD5000 graphics. This graphics card is supposed to be able to perform really well in games which was a huge bonus and also one of my requirements.

Getting the MacBook Air was awesome, I was treated like I was the only person in the Mac store and got tons of help with my decision. I ended up getting the new MacBook Air with a 512GB SSD and 8GB RAM. This setup didn't have touch, didn't have 16GB RAM and didn't have a kick-ass performing CPU. At this time I had no idea that it is a rip-off getting an i7 in one of these as the i5 performs just as good.

So after 7 days of suffering as Windows performs really badly when using BootCamp, sure I could run parallels but hey - I don't care about OSX at all so it is just in my way, I returned the MacBook. Don't get me totally wrong though, I did love the feeling of a MacBook, it's a super solid device with awesome battery life. For me though it didn't work out as it took 15 minutes to render a 2 minute clip in Camtasia which normally takes much, much less than that.

I browsed around and asked around at my job to see what others had recently gotten and I came across some brand that I had never ever heard about before; Metabox. By this time I had searched around and looked at tons of different models the only one that came close was AlienWare, performance wise that is. The only problem with AlienWare is that it is bulky and heavy and I didn't want a heavy laptop. That was one of the requirements that I didn't want to let go of, going over ~2KGs wasn't an option. Also I didn't want to go larger than 13". Basically I let go of the touch and 10 hour+ battery life requirement as the other parts of this laptop would compensate for that as you will see below.

More specifically I came across a laptop with the model number W230ST, this laptop is made by a company called Clevo. However, the special thing about Clevo is that their systems are entirely customizable which means that I can replace every piece in it (almost). It isn't assembled by Clevo but by their resellers so in my case I bought my laptop from Metabox which is an Australian company in Perth.

What they do is that they brand the laptop box with their logo and assembles it for you and you get total customizability. If I want I can replace the CPU in my machine with some other laptop CPU (with the same socket of course); which is interesting.

The W230ST is a 13" laptop that weights about 2KG or a bit less and it is extremely nice and feels very light. There are however a couple of things that I didn't get from my requirements list, which in this case didn't matter because everything else was so great.

When putting together this machine you get to choose the following:

I went with the following specification:

And I ordered the laptop through Affordable Laptops in Australia, I know there are a bunch of resellers in Europe so just google for them.

It has a very nice finish on the lid, feels rubberized however the rest of the casing feels a bit plastic. There's a backlit keyboard that you can adjust the brightness of and I think it's extremely nice to type on.

The device do get a bit hot when running stress tests such as Prime95, my CPU reached about 86 degrees and I have under-volted the CPU to be able to reach the turbo frequency faster and for longer periods of time as there is a hardware limit when it gets too hot. If you don't do too heavy stuff I would recommend going with i7-4800 as it's supposed to be a bit colder.

It will take a while to build when you order, I got mine within two weeks and the wait was horrible, I really hate waiting for hardware to arrive. I was a bit unlucky as I had 1 dead pixel on my screen, but I got it replace and from the time they picked it up I had it back on my desk within three days - kudos to Metabox!

I recommend this to anyone working with development that doesn't want to feel like their machine is slow. This is my primary device and it seems to be able to beat everything there is. I played Crysis 2 on Ultra settings and I didn't feel the FPS drop at all. I might have forgotten to add something, just let me know if you have any questions.

I was obviously not going to go on so long trips that the battery would be that important, as long as it doesn't die within 3 hours I am more than happy. It still would have been awesome if it lasted for 10+ hours, but I doubt I am going to need that so often. My requirements changed along the way as I let go of the touch and battery and focused on something powerful yet portable. The device is not as nice and slim as a MacBook but everything else with this device compensates for the lack of design, battery life and touch.

Here's a screenshot of me installing two virtual machines at the same time and doing some other work in the background see the temperatures, CPU usage and other: 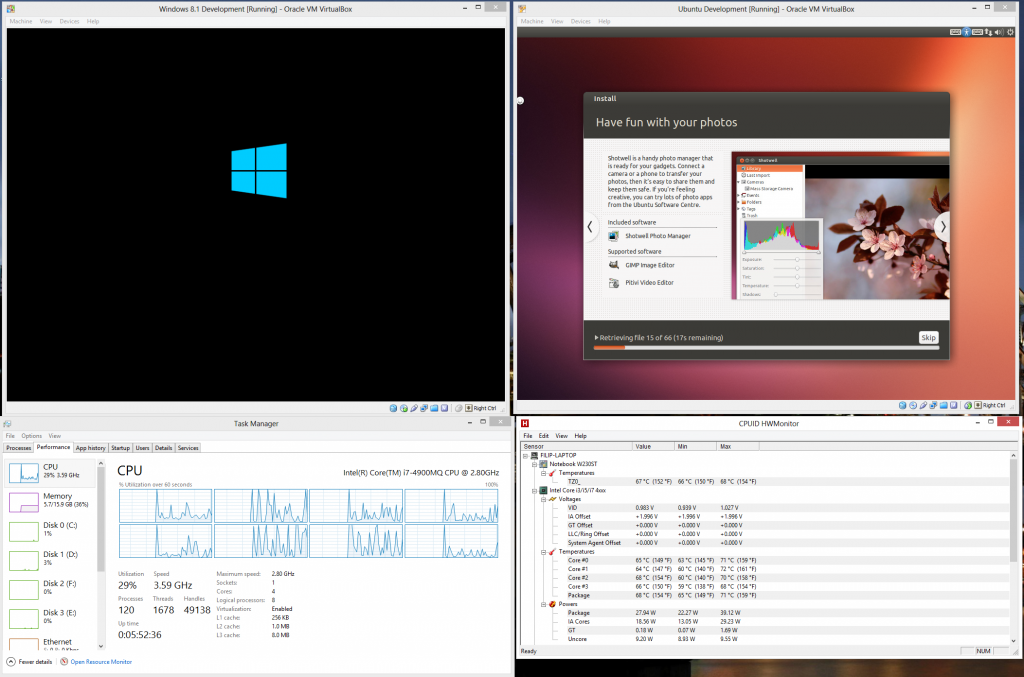 Here are some ATTO disk benchmarks, the first one is the OS drive which is a Samsung 840 PRO 512GB the second one is an Intel 525 240GB mSATA: 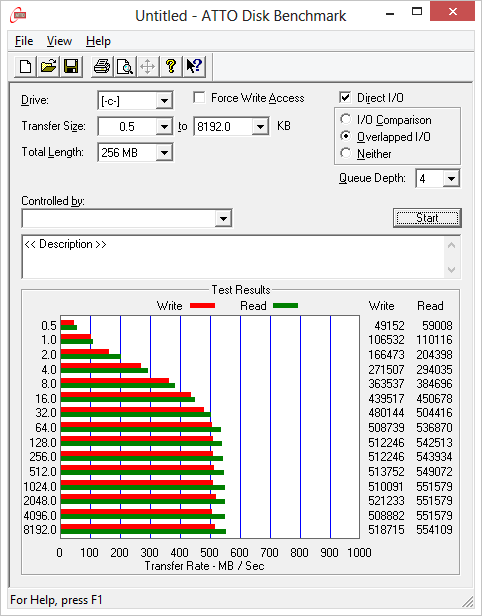 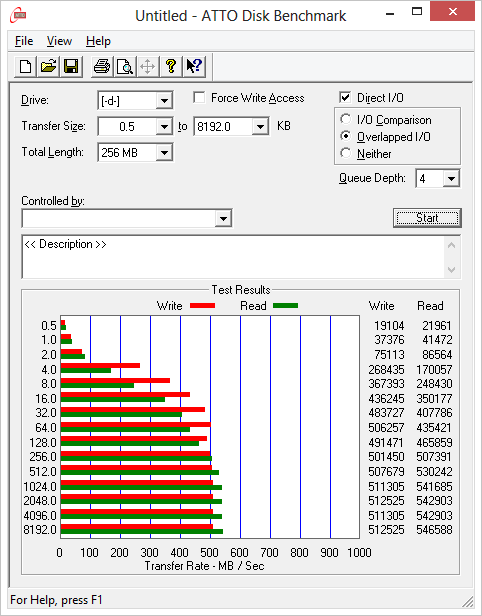 Here's the complete specification spectrum for the device, as you can see it is also called SAGER: 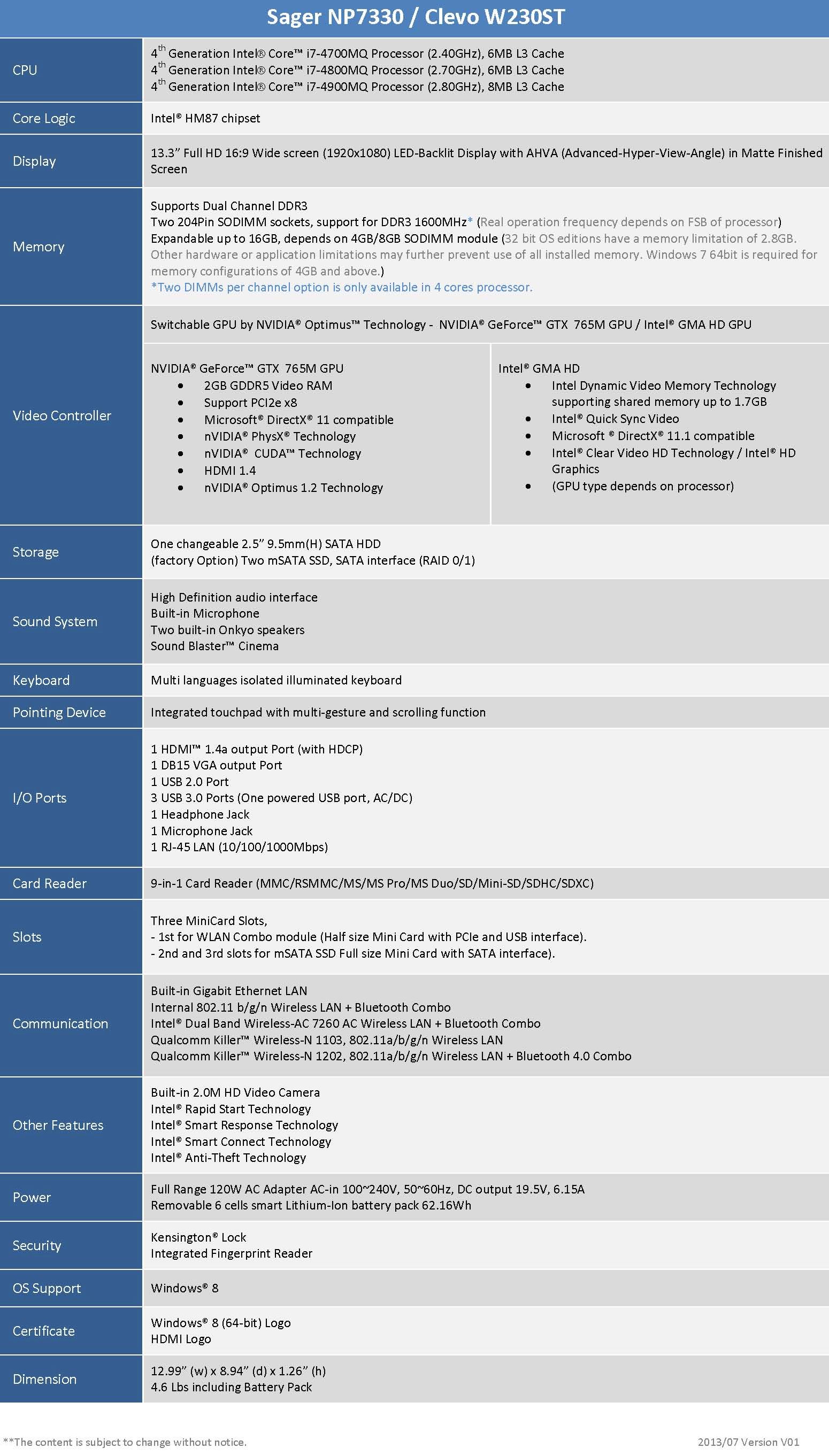 Some images borrowed from the W230ST Owners Lounge.